A Guide to Splitting Home Value During a Divorce 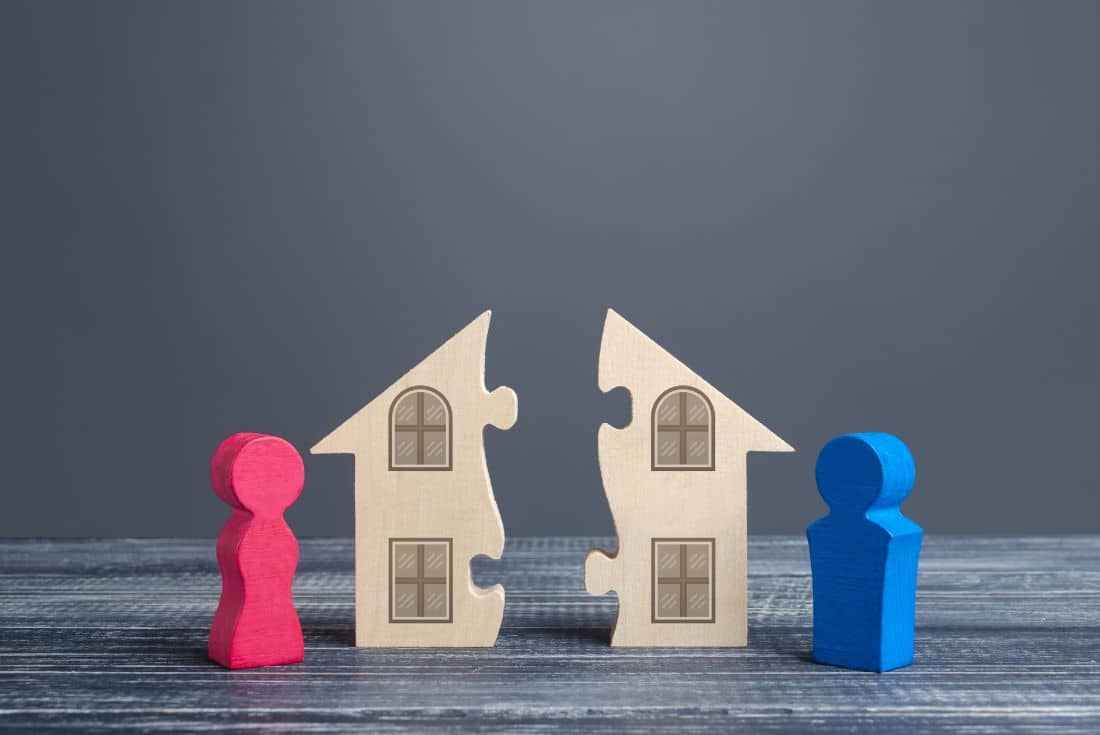 23 Nov A Guide to Splitting Home Value During a Divorce

Couples that live in community property states often assume that should they ever split, their property will be divided evenly between them. But it’s not as simple as that. In Washington state, courts are required to find a “just and equitable” division of property.

This means that each couple’s individual circumstances may dictate a result where one spouse receives more personal and real property than the other. The results depend on a number of variables. Here we’ve provided a guide to splitting home value during a divorce that should help you understand potential outcomes regarding how home courts determine home value in divorce, and how they assign it between partners whose marriage or committed intimate relationship is coming to an end.

How a couple acquired a home in the first place is relevant to determining how its value will be split between the partners. It’s not unusual for one partner to have provided the down payment, while both are listed on the deed and responsible for paying the mortgage.

Community property is defined as assets acquired by the couple during their marriage. Sometimes, assets the couple purchased or received before they were married, but during a time when it was clear they intended to form a marital relationship, may also be regarded as community property.

Inheritances are separate property unless it was specifically awarded to both partners.

Even if the home is regarded as separate property, the court could be empowered to award some equity from the home to the other spouse as a matter of fairness or financial circumstances. The court may also decide to keep the children in the home they’re accustomed to with the custodial parent.

Equitable Isn’t the Same as Equal

The words sound similar, but they don’t mean the same thing. Equal may refer to a 50-50 split of marital property, but equitable means fair and not equal. Courts in Washington will look to the totality of the couple’s circumstances to arrive at a fair division of property, including a determination of how a home’s value is to be divided, who will continue to be responsible for mortgage and tax payments, and which partner gets to remain in the home.

Factors like which partner makes more money, who will have physical custody of the children, and who can afford to keep the home after the divorce influence the court’s ruling. If one partner moves out, they don’t necessarily lose their financial interest in the home, and they might be paid the equivalent of that interest.

As the partners in a marriage or committed intimate relationship prepare to go their separate ways, they’ll be required to prepare a statement of their assets and debts and list property they regard as their own separate property, either due to an inheritance, as a gift, or property which they purchased before they were married. Remember, however, that separate property can lose its separate designation if it is commingled with marital assets, so not everything one spouse regards as separate may be treated that way by the courts.

Home values fluctuate according to the market, and there are several ways to determine a home’s value. The parties to the divorce can hire an impartial, professional, and licensed appraiser to provide an estimate of the value of the home. An opinion from a licensed appraiser will hold much more weight than tax assessments, which are usually considerably lower than the actual market value of the home, or comparative analyses provided by a real estate agent.

Timing is important when getting an assessment of the value of a home in divorce. Typically, the value will be assigned as of the date of the divorce settlement, or the date of trial, if it comes to that.

If the couple signed a pre- or post-nuptial agreement that specifies who the house belongs to, or an intent that it be owned in equal shares, the courts would enforce that agreement if it is shown to be legally sound. Couples can agree on a proposed divorce settlement that specifies who will remain in the house, how mortgage payments and taxes will be shared, and whether one or the other partner will accept a cash payment as a buyout of their interest in the home.

In rare instances where the couple can’t agree or doesn’t accept the home valuation, or if there are limited ways to divide the couple’s property otherwise, the court may order the home to be sold and the proceeds divided between the parties. This is a last-resort step, because selling a home can put a dent in marital assets with real estate commissions and capital gains taxes, if applicable.

If one of the partners has moved out because of a temporary court order in effect during a period of separation, that is not supposed to predetermine a final disposition of splitting home value during a divorce. It’s important to hire an experienced property division attorney who knows this rule, and to remind the court that the temporary order should have no effect on the final divorce settlement with regard to the disposition of the home.

Keeping the Emotion Out of It

Courts understand that spouses have strong feelings about their marital home. It’s the place you built a life together, and where you’ve been raising your kids. It may also have been the scene of many happy family memories, from holidays to graduation celebrations and anniversaries.

But sentiment doesn’t amount to legal standing, and how you feel about your home may not play a role in whether or not you are awarded the house in a divorce settlement. Your attorney provides emotionally neutral advice and representation designed to result in the best possible result for you in the divorce settlement.

You will have had private, confidential discussions with your lawyer about outcomes you regard as acceptable, and items in a proposed divorce settlement that you regard as non-negotiable. If remaining in the house you and your spouse own together is your top priority, your lawyer will walk you through what it will take to achieve that result and help you look at the situation realistically, all while considering your financial situation.

If your Washington state marriage is coming to an end, consult the experienced divorce and property division lawyers at LaCoste Family Law as early in the process as you can. That way, you can ensure your rights and hopes are zealously represented in divorce proceedings.